Creativity can take many forms and sometimes it’s good to indulge. Over the years I’ve found that doing something regularly is the best way to warm up the creative juices and find something we really enjoy. I’ve blogged about this before when I first joined postaday a few years ago and now I still post every day – but in a variety of places according to topic. It isn’t the blogging every day that has been important but the doing something that has enabled me to go on and do more. Every day I squeeze in just 15 minutes (obviously more if I can) and do something creative. I keep misquoting Picasso – but as he said ‘Inspiration comes, but it has to find you working’. My circumstances don’t always allow me to indulge as much as I would like – so those 15 minutes are precious.

This coming weekend is destined to be a CREATIVE WEEKEND why not join us? Find 15 minutes – more if the fancy takes you – and do SOMETHING! Maybe try something new – or indulge yourself in something you LOVE! Take a look here on Facebook This is the Friday page – but if Saturday or Sunday suit you better then there are events scheduled for then too. Then join us in the group It’s a closed group – that just means that you have to be approved. As it’s me doing the approving you can always let me know who you are blogwise if you wish. So far there are people from the UK, USA, SA,  Aus and NZ. Several from Europe too. After last year’s illness I’m still finding it difficult to do the things I really love – but I’m determined to get back into full flow this year and finish all my outstanding commitments and work on some new ideas.

I hope you will join us, but even if you can’t maybe you will spread the word. It could be a GREAT BUMPER WEEKEND. What qualifies? Almost anything – photography, writing, poetry, carving, collage, blogging, art, textiles, stitching, embroidery, journaling, quilting ….. even numbers are creative – so…… what’s your excuse? 😉

Let me know what you think.

Yesterday I promised you  a peek at something I’ve been doing.  First I’ll give you a quick intro.

The recent frost came as a bit of a shock.  I know we’ve had some good weather since then, but the first one killed all the Basil that I had in pots in the garden.  I use it a lot, so that was a great disappointment.  However, a trip to the supermarket was a source for some to stand on the kitchen windowsill, and here is a photograph of part of it, taken this morning.

It is a luscious green colour, and, of course, smells lovely.  I’ve been taking bits from it and adding it to my cooking, but it continues to grow, as you can see above.  Seeing it in the sunlight one morning reminded me of a design technique I used to quite enjoy, so I thought I’d remind myself of the process.  It was such fun, and this is what I’m going to begin to share with you today.

Firstly a word of warning!  I’m going to mention a word, and you will probably groan!  It’s a word that fills most people with dread, but it doen’t have to!  So don’t be put off – read on, because it doesn’t need particular skills to do this exercise………

I have several sketchbooks, some are small, and some are larger.  I chose a small one to begin this exercise, a small page is less daunting, there doesn’t seem much space to fill.  I usually put a wash of colour over the pages when the book is new, using anything from water colour, dye or tea bags, and this latter is what I found I had used for the next few pages.  The one that I used is A6 in size (10 x 15 cm, 4 x 6 ins), the sort that fits easily into a handbag.  I had already decided that my design source was going to be the basil plant, so I began to get to know it by doing some sketches.  In other words drawing!  Now, I’m going to show you what I’ve done, so don’t panic and run away, you’ll see that anything that you can produce is more than adequate for the finished design.

Each sketch (none of them are detailed drawings) that I’m showing you took less than 10 minutes, they weren’t all done at the same time, they were done at different times of the day and night (one was even done at 3am) which meant that different parts of the leaves were apparent at different times.  Those made using natural light emphasised some of the veining, those done later in the day were more difficult to see in detail, so there is a wide variation.  The plant stands on the window sill, and, although I moved it to draw, the shape changed as it was attracted to the light.  Here are some of the variations

This is a pencil sketch, not very distinct, but good enough for you to see the rough lines.  It is definitely 2-dimensional.

Sometimes I drew without lifting the pencil from the paper, I just chose a place to start and marked over any lines that were needed.  Basically, I’m just getting to know the shape.  It’s worth going through this process.  No-one needs to see your marks, so don’t worry about it.

I drew over some of the pencil drawings with a pen, I’m still getting to know the shape as I said 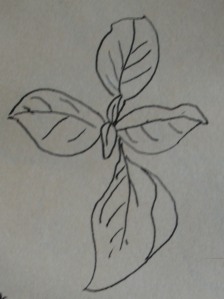 Sometimes I just used a pen as that was all that was to hand.

Continuous lines drawn with a thicker pen pruduces a very different result.  (I always note the tool I’ve used in the corner – in case I want to make similar marks in the future)

Very occasionally I even drew it over the page. The rings don’t really get in the way for this, although they would if it was a detailed drawing.

Of course, I couldn’t resist doing it with my left (non-dominant) hand as this is one of my favourite warming up exercises.  This one was drawn with a contiuous line in the same manner as before.

After several days I felt that I had learnt enough about the image to be able to move on.  You could even do a little drawing each day over a period of a week, if you haven’t much time.  The important thing is to get to know your subject.  Some detail may be superfluous, you will learn this during the sketching time.

So, on to the next stage.

Next, I took a clean, and larger piece of paper.  I chose a square approx 21 x 21 cm (8 x 8 ins) and,using a pencil, drew several wavy lines across in one direction.

(I forgot to photograph this stage, so this isn’t the actual page I used)

Lastly, I drew a few images over these lines.  Don’t be tempted to leave the wavy lines until after you have done this, it will effect your placing.  Make sure you do it first.  The drawings can go anywhere, you can even overlap some of the sketches, and you will see that I have done just that in the centre.

This is the final stage of drawing, and the next step is to add some colour.  This has been a long post, so I’ll leave that until next time.  Come back in a day or so for the next steps.

I love colour, and satisfy my thirst for that by dyeing using a variety of dyes. This is a great help in my personal work as I can incorporate unusual fibres etc when using my lovely needlefelting machines. I add further embellishment by way of hand dyed papers, machine embroidery and hand stitching. I enjoy teaching others to love colour too, and my method of teaching dyeing using procion dyes is both simple and logical.